RIVINGTON STREET: a street to remember 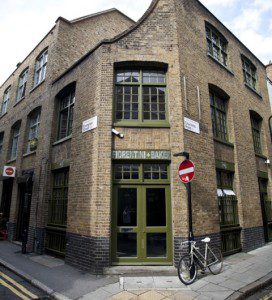 There is a lot more to 49 Rivington Street than just a ‘shoe shop’. Between those walls lie a unique history, typical of Shoreditch, that tells the story of perpetual change…tales of the past to recount. Between these walls, you immerse yourself in history, and become part of it.

49 Rivington street was built in 1860 during the period of the Industrial Revolution, and in its 160 years of existence has been a button factory, a strip joint, a director’s studio and a place where young radical thinkers of the 1970’s would convene.

Curious to know more about Rivington Street?
In a series of upcoming articles, we will discover the milestones that this building represented, both for Londoners and for people involved in those activities. 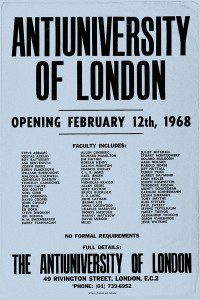 1968 has always been considered a crucial year in the history of Rivington Street. This was a year of rapid change and great importance, not only for the world, but for the building itself.
In fact the radical Anti-University project and the Vietnam Solidarity Campaign set up their headquarters here.

The ‘Anti-University’ played a brief but hugely significant part in the history of the area. Intent on promoting the idea that learning could and should be different, this was a period when people believed they could change the world by joining forces and fighting for a common cause and teaching the importance of solidarity, unity and perseverance.

Sadly this period was short lived and 1970 marks the year of the start of Shoreditch’s
decline. The Anti-University abandons the building and the manufacturing industry withers away. Years of decline and neglect ensue in the neighbourhood and also nationwide.